While vSphere ESXi pools the server resources together, the vSAN component of vSphere abstracts and pools the hypervisor storage.

they are 2 ways balancing the caching and capacity requirements in the vSAN cluster.

Using webclient a vSAN cluster can be created by enabling vSAN on it, and start configuring the disks.

vSAN ESX host must have a vmkernel dedicated and configured to serve vSAN traffic which is usually among the vSAN hosts.

Ex: an ESX having its VM on a disk of other ESX host, the IOPS happen through the vSAN vmkernel port group.

The data first enters Cache tier or disks while processing and slowly the unused data blocks will be moved over to capacity tier from cache when the data is infrequently used or becomes older. This ensures capacity tier is free enough to serve other IOPS. 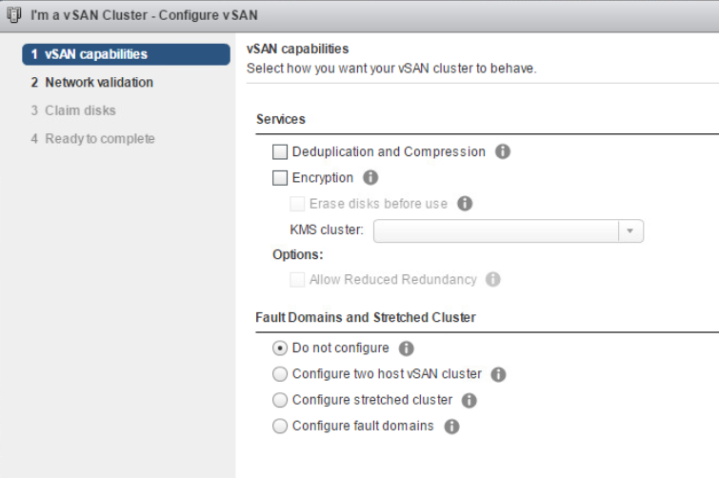 The cache and capacity disks can be selected from the total available disks. 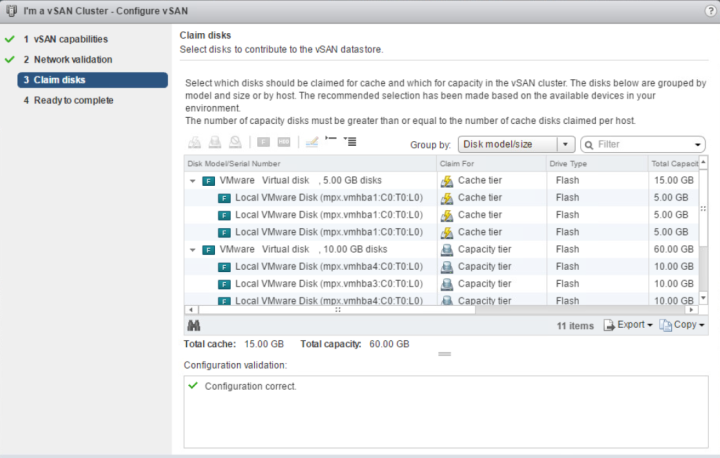 Once after completing the vSAN cluster configuration, you can actually notice under the tasks bar, all the disks being configured to vSAN cluster. 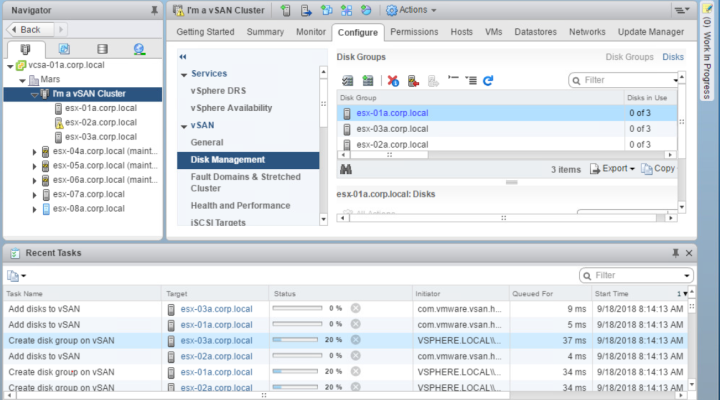 A vsan datastore appears immediately after creation of vSAN cluster. You can find the capacity of the vSAN datastore under its ‘configuration’ tab, which is actually the aggregate of each ESXi capacity in the cluster after excluding vSAN overhead+Deduplication metadata.

Storage Management Service(SMS) from vCenter automatically creates a storage provider on each host to ensure the communication between the storage layer and the vCenter.

In case the active storage provider fails, the standby one takes over.

vSAN configuration assist: This is the place to check vSAN health status. Click on the ‘Retest’ to know the health each time, and start fixing the warnings, errors.

You can configure HA/DRS as well from the Configuration assistant.

vSAN facilitates protection levels on VM’s based on their priority.RAID 5 and RAID 6 configurations require less additional capacity while protection level is chosen for a VM, than RAID 1.

It’s based on 2 factors. Performance and capacity.

Number of disk stripes per object: More stripes across the capacity disks, the more redundancy on VM’s.

Flash read cache reservation: Flash capacity is reserved for VM’s and will be specified as percentage of logical size of VMDK.

Object checksum: Checks every time if the copy is same as original object(VM) and corrects of not.

Storage policies can be created based on the above factors and select them while provisioning a VM.

By default the protection level for Swap object will be 1, because protection or redundancy is when a ESX server fails, it needs data. However in this situation while HA restarts the VM, the swap objects gets created automatically, once VM is powered on from a different ESX. Hence redundancy is not required for swap object.

Still there are 2 ways setting swap.

As you all know, this is nothing but the way storage is connected to ESX servers i.e. through Ethernet cables.

Active-Active: LUN’s becomes accessible on all ports, paths unless a path fails

Active-Passive : Out of 2 or more Storage Processors, only one will be active while other is in standby

Asymmetrical storage system(ALUA): This is a kind of intelligent method. Host uses some paths as primary while others becomes secondary.

Virtual port storage system : Storage will be accessible through one single Virtual Port.

Now, its time to create iSCSI on vSAN, enable it and configure target, followed by that iSCSI initiator groups have to be created.

vCenter server is responsible for requesting the KMS for a key while configuring the Encryption on vSAN cluster. Then, the KMS server generated and stores the keys on it. Now the vCenter pick them up and distributes them to ESX hosts.

One thing is that the vCenter does not store any keys on it, indeed it maintains the key ID’s assigned to hosts. 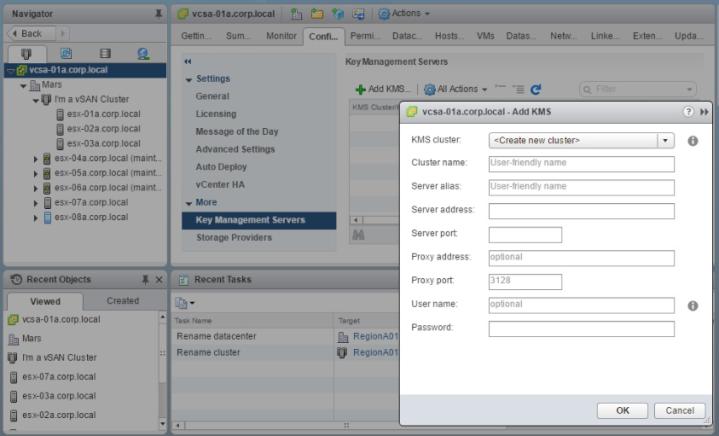 it comes to enabling the vSAN data encryption is happens at a glance and more over it is a seamless feature similar to other vSPhere features like HA, DRS.

The vSAN cluster encrypts the data including the virtual machine files and VMDK, as soon as it is enabled. Only the administrators with encryption privileges can perform Encryption and decryption tasks.

Important points to note regarding Encryption:

Setting up Domain of trust

The communication begins once the trust is established. Key will be exchanged between vSAN hosts and KMS server. The vSAN host requests KMS for key showing the Key ID it has got from vCenter and KMS in return provides the key to hosts.

vSAN Health check allows us to ensure the communication among hosts and KMS server is functioning well.

This is mostly useful in remote office branches to save costs.